Staying in more has meant lots more family time – and these Disney Theme Parks board games give you Disney magic without having to leave your house!

The Game of Life Theme Park Edition is a great choice since there is something for every Disney fan to love! This game is filled with clever references. I think my favorite square to land on would be the “Pick Up a New Pair of Mickey Ears” – like any Disney Fashionista, I’m happy to have an excuse for more shopping!

I can’t think of a more on-point theme than Disney Villains Clue. The classic mystery game asks, “Do you dare enter the Villains’ Lair?

Candyland The Disney Theme Park Edition is the sweetest game of the bunch! Foodies will love that it includes Disney Parks snack favorites like Dole Whip and Mickey Mouse Candy Apples!

Monopoly Theme Park Edition has been newly revamped to include Star Wars: Rise of the Resistance! This stunning edition of the world’s most popular game has a pop-up castle in its center. I love this option for a family game night since it takes longer to play – although there is also a 60 minute speed play option!

Disney Parks Uno is a fun game for Disney fans of all ages! With its convenient tin box, this game is ideal for travel!

We’ve raved about the Jenga The Disney Theme Park Edition before. Jenga doesn’t typically have themed versions, and this Hollywood Tower of Terror version looks like it would be terrifyingly fun!

If you’re more in the mood for some solo game time, then there are fun options as well! First up is a Disney Theme Park Rubik’s Cube! Have any of our readers solved a Rubik’s Cube?

Another fun one-player option is the Perfection Theme Parks Edition. The game board is shaped like Mickey’s head and all of the pieces are Disney icons. I love that this game includes Disney Cruise Line’s logo!

We found these games in Walt Disney World and Disney Springs – and some of them are available on ShopDisney!

Which of the Disney Theme Parks Board Games would be your family’s favorite to play? Let us know in the comments below! 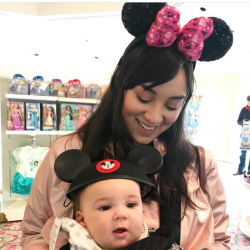 Allegra Koffler
Allegra K. is an attorney and full time Jedi who is happiest when wearing Minnie ears with a Mickey-shaped treat in hand. She currently lives just a stone’s throw away from the most magical place on Earth and is raising a two year old boy who loves Walt Disney World just as much as his mom! Follow along for Disney adventures and treats on Instagram.

Mickey and Minnie Easter Doormats Will Put A Hop in Your Step!